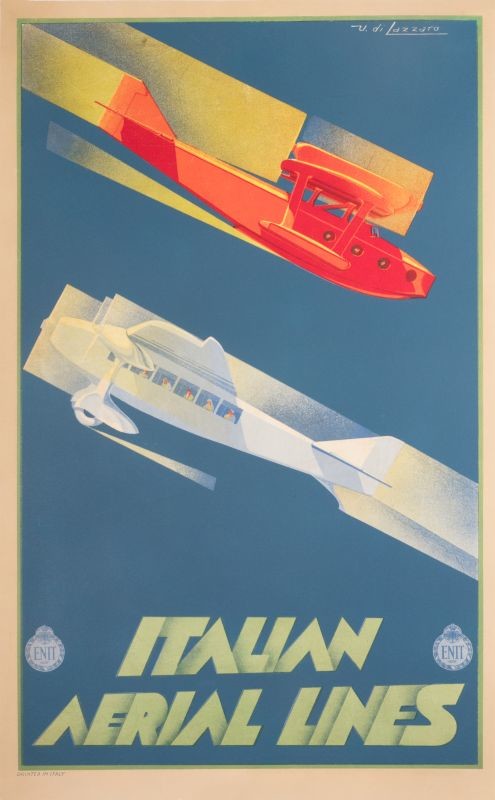 Lazzaro, Umberto di
Italian Aerial Lines, 1933 ca.
As the key symbol of technological progress between the world wars, the airplane became a favorite theme of Mussolini in his desire to create a “New" Roman Empire. By the time of this poster, the Italian civilian aviation industry had closed the gap with other major European nations, and Italy shortly would stun the world with daring intercontinental flights by Italo Balbo and a squadron of seaplanes from Rome to Chicago and New York. Italian Futurist artists were inspired to create streamlined aviation images to promote this national passion. Umberto di Lazzaro, who designed this superb civilian airline poster, defined the new “Aero” look. All the elements are here to emphasize speed and dynamism - airbrushed fuselages, 'lines of force’ trailing the planes, and streamlined lettering. One of the great early airline posters.
24.4'' x 39.3'' / 62 x 100 cm
Lithograph | Backed on Linen
ID# ITL11629
$6,001 to $10,000
VIEW MORE POSTERS LIKE THIS...
Country & Style
Other Keywords
Colors