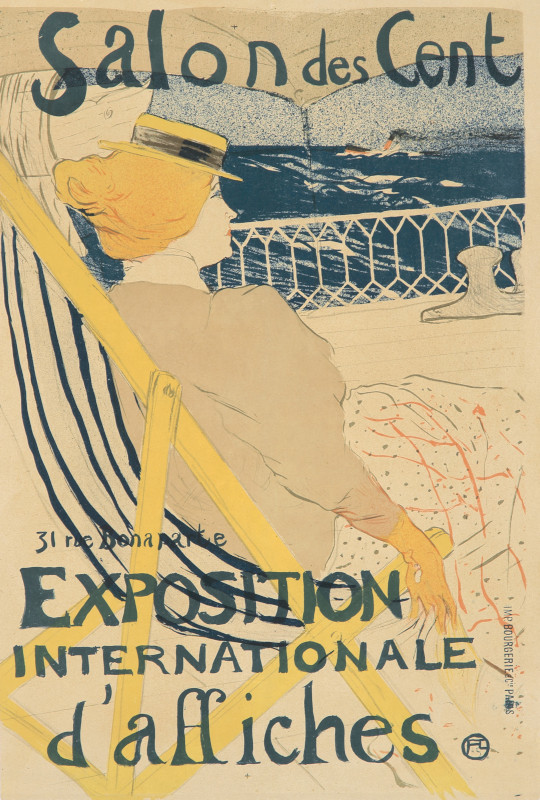 Toulouse-Lautrec, Henri de
Salon des Cent, 1896
Lautrec's poster for the Salon des Cent is one of his most beautiful and accomplished posters. Known as the "Passenger in Cabin 54", it is a portrait of a married woman who completely captivated the artist on a short steamer hop down the coast of France - so much so that he would have continued the journey all the way to North Africa if his friend had not intervened (he finally disembarked in Portugal). His subject sat on a deck chair motionless, deep in thought or delighting in the moment, as another steamer passed in the distance. The poster's psychological mystery (a recurring theme in Lautrec's posters) is complemented by a very intricate 7 color lithographic design. Its complex interplay of colors and carefully angled composition express the contrast between the outwardly peaceful woman and the churning ocean. The design was created to promote a poster exhibition at the Salon des Cent, or Gallery of the 100 (Artists), which included many of the leading Art Nouveau and avant-garde artists in France. Many created masterpieces for the Salon's exhibitions, including Mucha, Grasset, Berthon, de Feure and Bonnard. The themes vary but generally are of women involved in creative or contemplative poses. Lautrec made several sketches and even a photograph of her in this setting; we do not know if she even knew of his presence. He clearly held her in reverence as she so elegantly sat beneath the ship's canopy.
16'' x 24.1'' / 41 x 61 cm
Framed Size: 25.5'' x 34'' (65 x 86 cm)
Lithograph | Backed on Linen
ID# FRP27743 (FRAMED)
over $10,000
VIEW MORE POSTERS LIKE THIS...
Country & Style
Other Keywords
Colors