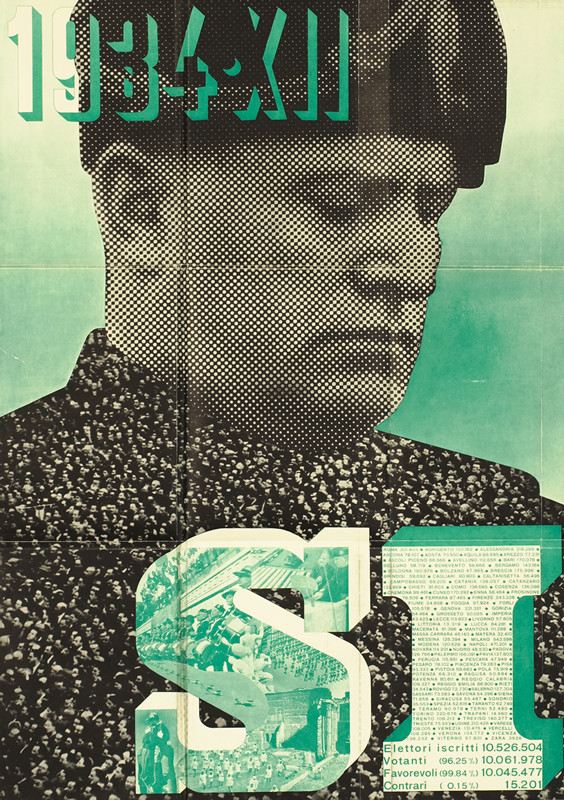 Xanti
1934 XII-Si, 1934
This famous poster by Xanti was folded into the April 1934 issue of the Illustrated magazine of the People of Italy, the official magazine of the Fascist party. This design - without the word Si, or yes - was originally published to support the referendum on Mussolini's rule and was posted throughout Italy. After the election, the design was reprinted with the word Si added, was folded into the magazine so that the back side would appear containing milestones in Mussolini's rise to power. Unfolded, it revealed the modified poster to indicate that the Italian people voted overwhelmingly to support Mussolini. Carefully rigged by the Fascists, the referendum was approved by 99.84% of the very restricted number of voters. Xanti studied at the Bauhaus and became a major figure there. When it closed in 1933 he moved to Milan and joined Studio Boggeri, the avant-garde design studio. This remarkable poster reveals the full power of photomontage for propaganda, a lesson Gustav Klutsis was putting to good use at the same time in the Soviet Union. Here Xanti cleverly shows the masses filling the dictator's coat - a tremendous metaphor for his embodiment of the will of the people. Xanti left Italy in 1936 for a professorship at Black Mountain College in North Carolina.
26'' x 38'' / 66 x 97 cm
Photomontage | Paper
ID# ITL03340
$3,201 to $6,000
VIEW MORE POSTERS LIKE THIS...
Country & Style
Other Keywords
Colors