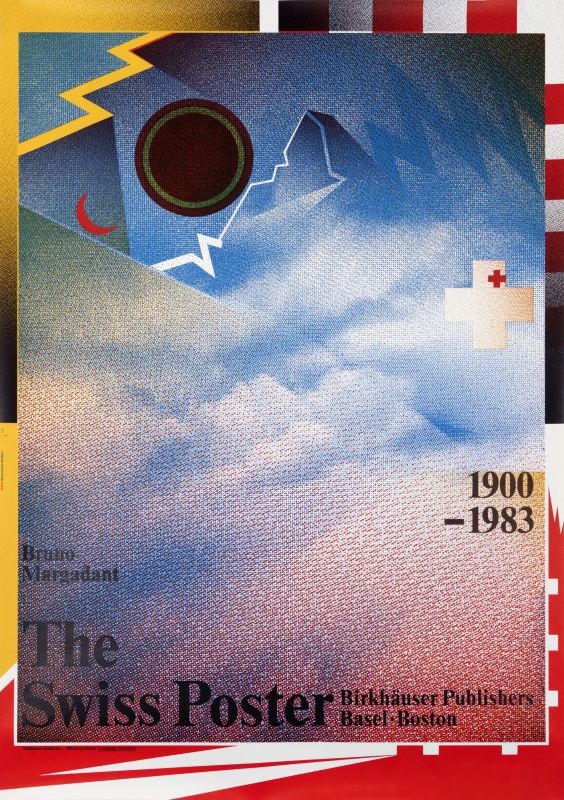 Weingart, Wolfgang
Das Schweizer Plakat (blue), 1984
Weingart's explosive work for the 1984 Swiss poster retrospective is itself a landmark in poster history. Reacting against the simplicity, structure and objectivity of the International Typographic Style, Weingart ushered in Post Modernism, a style based on complexity, intuitiveness and personal expressiveness. Weingart, a German by birth, started as an apprentice in a type shop in Stuttgart. After finishing a three-year apprenticeship, he enrolled in Armin Hofmann's design course in Basel. Unable to deal with the structure, he quit after three weeks - only to find that Hofmann and Emil Ruder wanted him to stay and work on his own. Four years later his brilliance was recognized by Hofmann, who offered him a teaching position in Basel's prestigious program for foreigners. Weingart quickly began to explore every aspect of typography and break every rule of his mentors. By the late '70s he turned his attention to the very process of offset printing, and developed an entirely new way of creating collage. By layering film positives of text and images, he created a way to tightly integrate all elements of the design. His most famous signature is the enlarged half-tone dots and the moiré patterns they create when the film positives are stacked and shifted. They yield an unprecedented richness of texture and overall unity of design. Weingart's exhibit poster is all the more interesting because of the rich imagery it evokes. Most clearly seen is the Swiss cross, which is a reference to Herbert Matter's great Winter Holidays in Switzerland Poster. Separated by 50 years, Weingart is closer in style to Matter than to his immediate predcessors. Matter's eight revolutionary travel posters for the Swiss Tourist office were the first to use photography as collage - purely as a design element such as type. Weingart's use of film positives achieves a similar breakthrough. In addition, both he and Matter share a playfulness that is far from the seriousness of the International Style. We know that Weingart loved the mountain peeking through the clouds in Matter's Winter Flights poster. He shows a similar break in the clouds in his exhibit poster. The poster abounds with other Swiss imagery, too. Most obvious is the Matterhorn, shown from a similar angle as Cardinaux' 1908 poster masterpiece. A final reference to Matter is the abstract zigzagging road, which echoes his famous All Roads lead to Switzerland poster. The winding mountain pass is an icon in Swiss posters - it appears in the work of Stoecklin and Muller-Brockmann as well. Weingart concludes his kaleidoscopic vision with the introduction of smokestacks and air pollution (in the form of black half tone dots) in the far right.
35'' x 50'' / 89 x 127 cm
Photo offset | Paper
ID# SWL00087
$1050
VIEW MORE POSTERS LIKE THIS...
Country & Style
Other Keywords
Colors