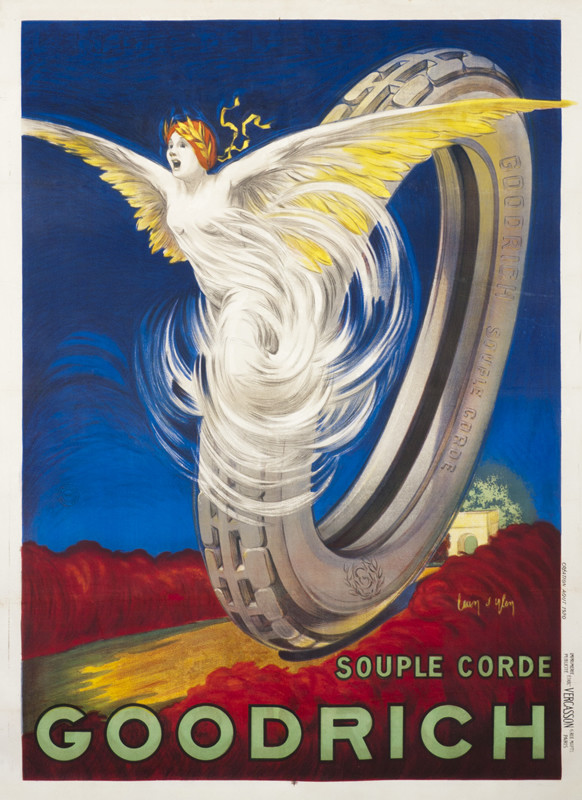 d'Ylen, Jean
Goodrich - Souple Corde, 1920 ca.
This wild poster serves perhaps as a metaphor for the year. It refers playfully to the famous Greek statue, the Winged Victory of Samothrace. Standing on the prow of a ship, the goddess overcame all odds to bring victory to the Greek fleet. Here the goddess stands on the prow of a giant tire, absorbing every road shock - although with an expression of alarm as she anticipates each bump and hazard. Smoothing out the road was a good idea in post-war France, where roads had been blown to bits by shells and misuse for four years. So a good tire was mandatory. But a careful and cautious attitude was in the air for everyone through this recovery period. The Roaring Twenties began cautiously. Jean d'Ylen, a leading jewelry designer, was hired in 1919 to succeed Leonetto Cappiello at the printing house of Vercasson as its in-house maestro. Although strongly influenced by his predecessor, d Ylen quickly developed his own successful style which as seen here featured intense color and emotions.
46'' x 63.3'' / 117 x 161 cm
Lithograph | Backed on Linen
ID# FRL23672
over $10,000
VIEW MORE POSTERS LIKE THIS...
Country & Style
Other Keywords
Colors