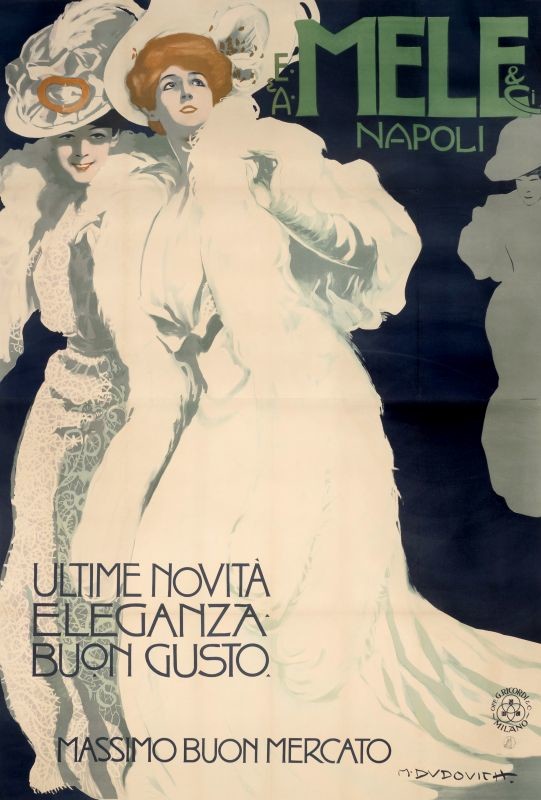 Dudovich, Marcello
Mele & Co. Ultime Novita Eleganza Buon Gusto (Spotlight), 1907
One of the most important poster series of all time was created for Mele, the pioneering Naples Department Store.  From 1895 to 1915 the Mele brothers commissioned over 180 of the most elegant posters ever created. The series was produced by Ricordi, the Milan lithographic printer which had made its name in music publishing and opera posters. Since 1895 Ricordi put its very best artists (Cappiello, Metlicovitz, Terzi, Laskoff and Caldanzano) to work for the retailing powerhouse. Using large format images, Mele brought the elegance and excitement of pre-war High Society to an eager and growing Italian bourgeois class. The posters were regularly reviewed in the press and were even sold in fine art galleries.  By far the most spectacular posters in the series are fourteen by Marcello Dudovich. The protégé of Metlicovitz rapidly developed into the leading poster artist in Italy, eliminating many Art Nouveau flourishes for a more modern style. Between 1907 and 1914, he achieved a richness and monumentality scarcely achieved before or since in poster art. Here, we see a red carpet view, as two young women head to a formal party.
56.5'' x 81'' / 144 x 206 cm
Lithograph | Backed on Linen
ID# ITL02043
over $10,000
VIEW MORE POSTERS LIKE THIS...
Country & Style
Other Keywords
Colors