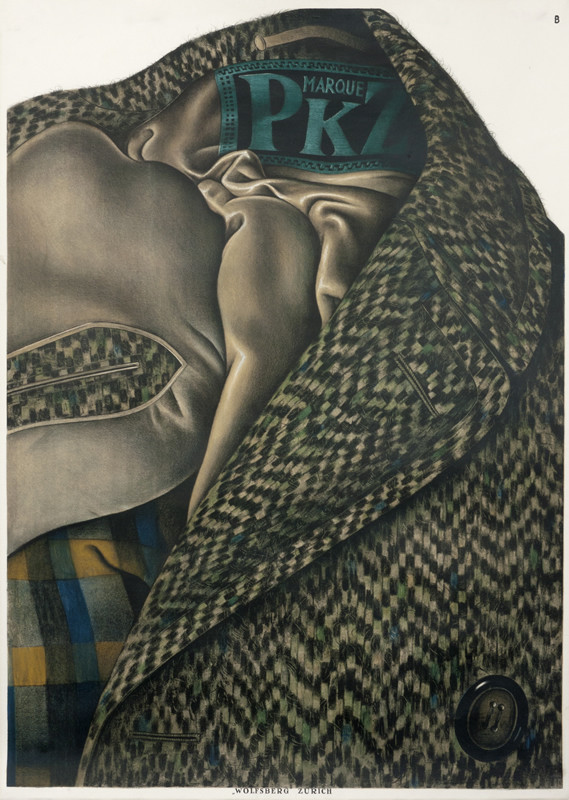 Baumberger, Otto
PKZ (Coat), 1923
Baumberger's poster for the Zurich clothier is one of the most famous posters of all time, as well as the most famous Swiss Object Poster. It was so realistic that most people mistook it for a photograph. The PKZ Coat was the first Object Poster in which the artist omitted all superfluous text from its design. Rather, Baumberger cleverly used the coat's label to serve as identification for the advertiser. The poster also broke ground in its dramatic hyper-realism, where every detail down to the smallest wool fiber appears life-like. This is a testament both to Baumberger's graphic skill as well as to the world-renowned lithography of J. E. Wolfsenberger For over 80 years, the Zurich clothing store PKZ commissioned the most talented Swiss and German artists to design their advertisements. In the early years, PKZ engaged sophisticated German artists such as Munich's Ludwig Hohlwein, or young Swiss artists who had studied the new art of poster-making in Germany. One of these young Swiss pioneers was Otto Baumberger, who studied in Munich before WWI and created five masterpieces for PKZ. PKZ is still a prominent retailer in Switzerland today.
35.5'' x 50.3'' / 90 x 128 cm
Lithograph | Backed on Linen
ID# SWC01278
$6,001 to $10,000
VIEW MORE POSTERS LIKE THIS...
Country & Style
Other Keywords
Colors