Wings to Guatemala - It's a Small World by Pan American Airways 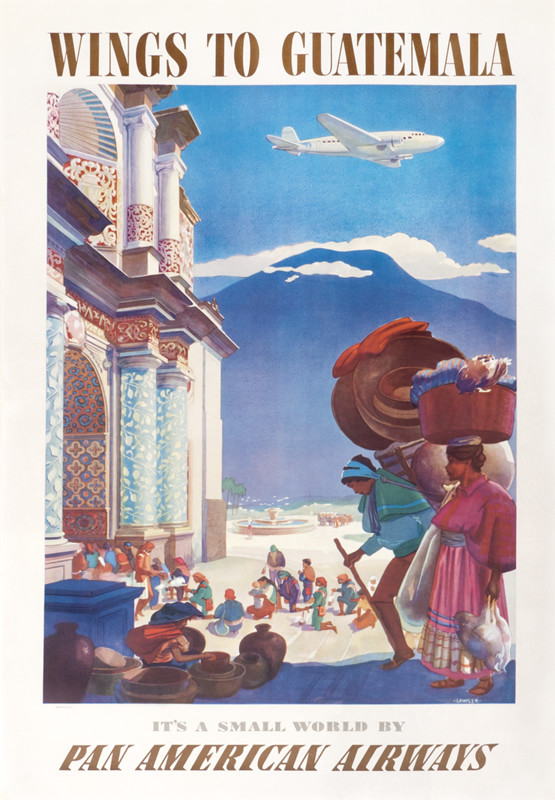 Wings to Guatemala - It's a Small World by Pan American Airways

Lawler, Paul G.
Wings to Guatemala - It's a Small World by Pan American Airways, 1938
"It's a Small World" was the tagline of this very early airline poster advertising Pan Am's new long haul flight to Guatemala in 1938. Indeed, Pan Am changed the world by systematically solving most of the problems in intercontinental aviation single-handedly. Using brilliant pilots like Charles Lindbergh to pioneer routes to remote lands and test experimental aircraft, Pan Am became the first airline to begin rapid scheduled flights across the Pacific, Atlantic and throughout South and Central America in the late 1930s (at the astonishing cruise speed of 180 mph!). Pan Am chose a superb illustrator, Paul Lawler, to create a series of fine posters to build its brand and advertise all of these routes beginning in 1937. This image of the main church of Guatemala City (also known as the Metropolitan Cathedral) highlights the exotic experiences awaiting the lucky few who could afford to fly between continents.
26.5'' x 41'' / 67 x 104 cm
Framed Size: 0'' x 0'' (0 x 0 cm)
Lithograph | Backed on Linen
ID# USC24944 (FRAMED)
$3,201 to $6,000
VIEW MORE POSTERS LIKE THIS...
Country & Style
Other Keywords
Colors